skip to main | skip to sidebar

The microK 100 Design Team Have Their Say on the Project
It is not unusual to hear the phrase “if I had known how hard it was going to be, I wouldn’t have started this!” being voiced within the design team, usual somewhere near the end of a project… and the microK 100 project was no exception. Equally, when the project is complete, we can look back and wonder what all the fuss was about, after all the solutions to the problems that once seemed insurmountable are obvious when (at last) these problems are properly understood. These cycles of confidence, confusion, depression, euphoria and satisfaction, like the seemingly inevitable cycles in the economy, appear to be part of life (at least for the design engineer).
The original microK range was launched in 2006 with the 0.4ppm and 0.8ppm models aimed at secondary calibration and precision measurement applications and these two products have proven very successful in the market segment they targeted. However, it seems to be the curse of the design engineer that when we have a good product we can’t leave it alone and almost immediately we started to wonder what we could do to make it better. This is not, however, wasted effort as it often leads to improvements that benefit a product both technically and commercially.

So it was that we started to consider how we might achieve 0.1ppm performance and so open up the primary standards market for the microK range. The key things we needed to do were to improve the linearity of the measurement system and reduce the inherent noise of the instrument. We thought we understood what determined the performance of the original microK products and therefore what was required to achieve the target 0.1ppm performance (optimism, born of ignorance, that sowed the seeds of later frustrations!). As well as having to improve the product, we also had to put a lot of effort into improving our calibration capability. Working at the 0.1ppm level is pretty demanding and in order to discriminate linearity errors on a 0.1ppm instrument we had to be able to have a calibration capability at the 0.01ppm level.
Linearity
The new microK 100 uses the same substitution technique as the original microK range and therefore provides inherent zero and unity ratio stability. It is therefore only necessary to design and ADC and signal conditioning system with adequate linearity in order to achieve the target performance.

Sigma-delta ADCs are readily available as single integrated circuits and provide phenomenal resolution. However, their linearity is significantly more limited than their resolution and the converted signal is inevitably quite noisy (since they rely on taking a very noise, binary signal and filtering it heavily using DSP). The microK 100 ADC is different in that it uses a 5-bit DAC in place of the 1-bit DAC in the control loop. This would not normally be feasible, since the DAC would ‘carry’ the full accuracy burden of the measurement. However, the microK 100 ADC uses pulse-width-modulation (PWM) to generate the 5-bit signal thereby converting the analog signal requirement into one of timing. In order to achieve our target 0.1ppm, we needed to be able to produce pulses whose edges have relative timing errors of 1ps (about the time it takes light or electrical signals to travel 0.3mm). It was this requirement that eventually presented the greatest design challenges (the “if only I had known…” stage). In keeping with our design philosophy, we were eventually able to do better than our target to ensure that the new product would exceed its stated performance. However, the design had to change significantly in order to improve both linearity and noise and the digital signal processing that is at the heart of the ADC changed to the point that we needed to double the size of the FPGA used to implement the functionality.

Noise
The other key performance parameter for the microK 100 is low noise. This presented an interesting challenge and eventually led to the development of a novel circuit topology. With the ADC’s low noise contribution, the microK’s overall noise performance is determined primarily by the input noise of the amplifier used to sense the small voltage developed across the PRT. This noise is generated by the amplifier’s input voltage noise and its input current noise flowing through the input impedance. Typical figures for low noise operational amplifiers (or discrete semiconductors) are around 2nVHz-½ and 0.2pAHz-½ respectively. A thermometry bridge is typically connected to a PRT with a resistance of perhaps 25Ω, in which case the voltage noise clearly dominates the result and the contribution of the current noise is truly negligible.
The best AC bridge designs use “noise impedance matching” to minimise the noise contribution of the semiconductors used in the amplifier. Since the waveforms in an AC bridge are sinusoidal, a transformer can be used at the input to the amplifier to reduce input noise at the expense of voltage noise: 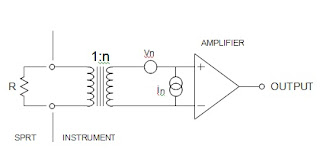 The transformer reduces the voltage noise (referred to the input) by the turns ratio (n). Correspondingly, it increases the current noise by a factor of n. By increasing n it is possible to reduce the voltage noise at the expense of increased current noise. There is clearly an optimum value for n and this occurs when the “noise impedance”, which is defined as the ratio of the voltage to current noise (vn/in), is matched by the transformer to the input impedance, R.
This noise reduction technique can only be used with an AC resistance bridge (it cannot be used in switched DC bridges or DC current-comparator bridges) and this is one of the reasons that AC resistance bridges have historically been the instrument of choice for primary standards temperature metrology.

In developing the microK 100, we had to devise a similar noise reduction technique for use in switched DC systems. The technique involves using a number of amplifiers connected in parallel: 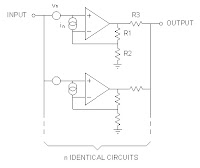 Each amplifier contributes linearly to the desired output signal. However, the noise from each amplifier contributes as the RMS (root of the mean squares), which is less than the linear summation of the signals. In a similar way to the noise impedance matching technique used in AC resistance bridges, we are able to reduce voltage noise at the expense of current noise by using a number of amplifiers connected in parallel (increasing n).
The microK uses a large array of amplifiers in order to reduce the voltage noise to a level that was only previously achievable using the best AC resistance bridges.

Final Thoughts
At the end of all design projects, there is a feeling of relief and achievement at having reached the technical goal. With the memory of the struggles to overcome problems encountered along the way still fresh in out minds we declare that this design is a good as it can be and resolve never to try to improve the product’s performance. Déjà-vu… this is exactly the position we were in when we launched the original microK… I wonder how long it will be before we forget the pain and look for the next technical challenge?